One of the less commented upon problems with calculating housing affordability on the basis of income is that many subsidies for low income people that exist or can be anticipated to exist in the near future don't make it into their "gross income" and instead they land on the balance sheets of various government programs designed explicitly to help people.

Example: the Affordable Care Act includes subsidies for low income people to have free/cheap healthcare. If the government gave people the money and then people used it to buy insurance it would be included in their "gross income" but since the subsidy goes from the government to the insurer (in some cases Medicaid, a government program) it stays out of the household income calculations.

This is why Housing Now is hard at work on the "Family Housing Cost Model" to allow us to better model affordability based on real world data and to better identify ways to make our communities more affordable to all.

We're proud to announce that the Family Housing Cost Model (FHCM) is less than a month away from going "beta". We have good working numbers on all major cost areas, now we'll be working on refining/validating this data, adding in minor costs, and increasing the usability of the model for policymakers.

Here's a sneak peak at the "Family Cost Model" side of the FHCM which looks at the non-housing cost side of the family budget. 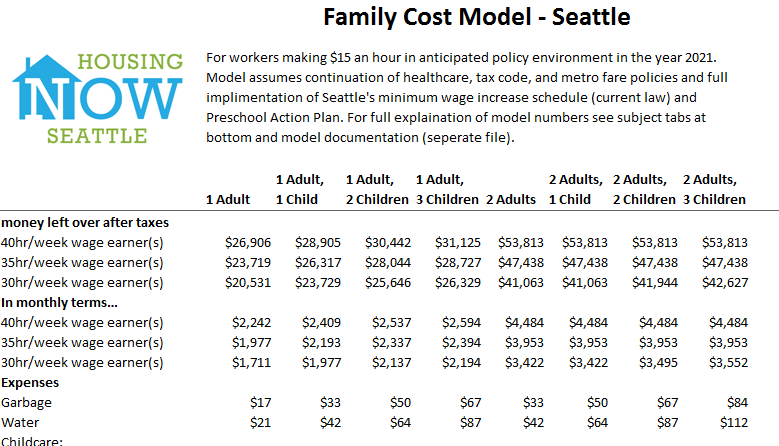