The Housing Now campaign proposes that the City of Seattle publicly finance naturally affordable housing. Naturally affordable housing is housing that achieves affordability without need for subsidy. Unlike subsidized housing, it is priced such that rents will cover the costs of its creation.  This is similar to a recent proposal to finance a new basketball & hockey stadium that would have utilized public loans to be paid off by revenue from the stadium. If we can seriously contemplate financing a stadium this way then financing housing should be a slam dunk.

In order to make this work, inexpensive land, efficient design, and minimizing frills will be the primary driver of cost savings, which means there are limits to how low rents can go. This won’t be suitable for everyone, particularly for extremely low income households and those who want or need lots of space. We’ll also continue to need private market rate housing for those who want larger units or more features and can afford to pay for it. Nevertheless, publicly financing naturally affordable housing can fill a currently unmet niche.

This approach requires no new construction techniques, merely efficient application of known methods. Look for example at the cost of constructing subsidized housing: 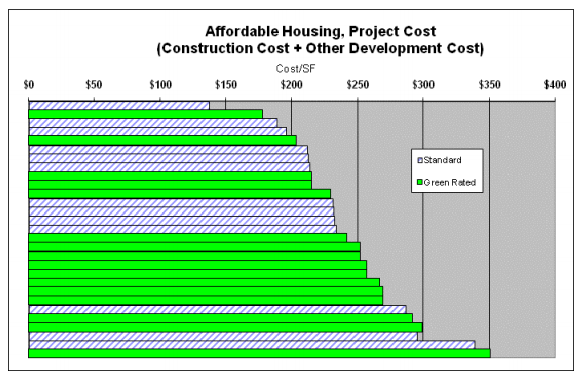 (Source: Cost of Green: Analysis for Affordable Housing in Seattle and Portland, Prepared by Davis Langdonhttp://www.seattle.gov/Documents/Departments/OSE/Cost-of-Green-AffordHousing.pdf)As you see, we already know how to construct housing at $200-250 per square foot. Variation in cost per square foot depends upon many different factors including building design, number of units, and land costs. We can and should bend all of these downward. How many and how large the units built under this program depends also on what we think households "should" pay for affordable housing.In the Seattle City Council’s deliberations on the minimum wage increases, befor ultimately settling on $15 an hour as the minimum wage rate to be phased in, they considered many different sources regarding what a living wage should be. Two things stand out from these calculators:

1. A $15 minimum wage is considered sufficient only for certain household types, namely single adults and couples with up to one child, and;

2. The range of housing costs for these households was $770-1,047 for singles and $878-1,260.  The department of Housing and Urban Development in contrast considers 30% of income to be the upper threshold that households should pay for housing. This works out to $750 per month for a single adult making $30k and $1500 a month for a couple making $60k.*This gives us a target “ceiling” for how much units should cost. Given this ceiling, what is the average unit size we can expect? We're working on a draft white paper detailing our findings, but thus far our calculations show that the economics are strongest for 220-475 sqft one bedroom and efficiency units that are affordable from day 1. After loans are paid off these units become even more affordable, presenting interesting long term options for increased affordability aka "Housing Later". We're interested in meeting with housing finance/construction experts to refine these numbers further, so if you have expertise goes this way we'd like to meet with you.One of the advantages of the direct finance approach is that we can scale it up relatively quickly. Just as Sound Transit contracts with private companies to build transit facilities, Seattle can contract with private and non-profit developers who know housing. Once built, apartments can be offered on an “income adjusted” basis that ensures that low income residents are given priority but also that no one should have to move if their income situation improves.  The city can either own the housing directly or else regulate it through contracts and deed covenants to ensure that the intended affordability is achieved.